She Wore A Yellow Ribbon! February 28, 2020
This is the FA Cup Preview - and like Mesut, I am counting down the minutes!

He's even changed his banner on FB to the one above!

And is just being adorable with Lukas Podolski, all the time:

.
The FA Cup is the oldest cup competition in the world. Should Mesut win it, it will be his third cup win in a third league. He also has the Bundesliga Pokal (for which he scored the winning goal) and he won the Copa del Rey in his first year with Real Madrid.

It would be Arsenal's first trophy win in 9 years, since the 2005 final, which was decided by then-captain Patrick Vieira's penalty kick.

The title of this post is a reference to the famous Arsenal song "She Wore A Yellow Ribbon" (For "The famous Arsenal, because we're going to Wembley!") Please enjoy this video of the boys singing the song - with Per, Jenks and the Ox doing the best job and Flamini looking like someone is holding a gun to his head.

In house media to Mesut (joking): "We'll give you the first three interviews in German for free. But after that you pay for your own translation!" 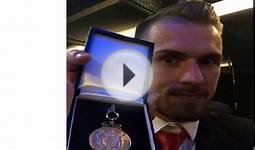 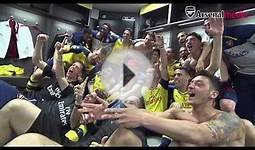 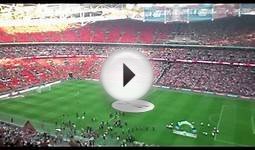 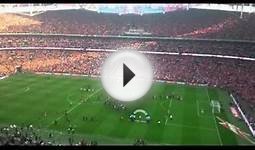