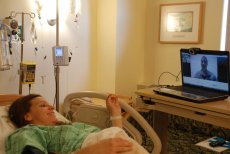 When we first met Amy Wasik at home in Cromwell last summer, she was taking care of her dog's nine new puppies, running her two daughters around to activities, becoming accustomed to the surprise baby she was carrying and preparing to say goodbye to her husband, Dave, who was leaving for Bahrain with the Connecticut National Guard.

"It was a crazy year, absolutely, " the medical assistant says. "I took it one day at a time and I got through it. I look back and [think, ] 'Oh wow, I can't believe I just did that'!"

She hopes life will settle down now that her husband has returned and is getting to know his new child, a precocious 6-month-old named Aubri.

"The family and friends that supported us this whole time, I really couldn't have done it without them, " says Amy, grateful for all of the carpools and dropped-off meals while her husband was overseas. "There was a little uneasy feeling without having him by my side at night, like, what if I need to run out and get some Motrin or something for the baby or something for the girls?"

Thanks to modern technology, she delivered Aubri in December with "Army Dave" by her side.

"Skype worked phenomenally, " says the member of the 248th Engineer Company, who also corresponded with his 5- and 8-year-old daughters via the computer. "I do remember some hard times when Amy would tell me the girls were missing me more one night at bedtime or something.."

Dave was also deployed to Afghanistan when his oldest daughter was a toddler, and he found it difficult to transition back into home life.

"It's tough to change the mentality coming back and swapping over from warrior to husband and father, " he said last July.

This time, he plans to lean-on the veterans resources: "We've used them in the past, as far as just talking and learning how to deal with each other and the kids again and taking life slow in the beginning."

The National Guard has partnered with state agencies to provide services to soldiers through the Yellow Ribbon Reintegration Program, courtesy of embedded clinicians, chaplains and transition advisers.

Amy is committed to easing Dave, a state DOT employee, back into the busy daily routine. While the last year was really tough, she always focused on her blessings. Good homes were found for the puppies, Aubri's birth was smooth and the older girls grew in leaps and bounds. And her husband of a decade, who recently signed his final contract with the Army for another six years of service, got home just in time for Father's Day.

Upon his return, Dave immediately hugged his girls and enveloped the baby in his arms as she reached out and held on to her daddy's face. After snapping a picture, Amy just watched, crying tears of joy: "I'm so happy."