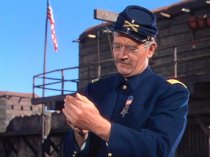 So here they are, the dog faced soldiers, the regulars, the 50 cents a day professionals of the nation's outposts. From Fort Reno to Fort Apache to Fort Starke, they were all the same. Men in dirty shirt blue with only a cold page in the history book to mark their passing. But wherever they rode and whatever they fought for, that place became the United States.
Dedication to the US Cavalry

It's probably fair to say that, while it isn't his finest work, She Wore A Yellow Ribbon is one of John Fords best loved films. It's the second of the unofficial "Cavalry Trilogy" between Fort Apache and Rio Grande, and is about as typical an example of Ford's work around the turn of the decade as you could find. Sentimental, nostalgic and boisterous, it's the archetypal Hollywood western and none the worse for that.

John Wayne, in one of his very finest performances, plays Captain Nathan Brittles, an officer of the Seventh Cavalry who is due to retire in six days time. His family are all dead and he has nothing to look forward to except a vague notion of a new life out West, in the developing communities of California. However, this is 1876 and the defeat of Custer has caused the Cheyenne to declare war against the intruders, preventing wagon-trains and stagecoaches from passing. The Seventh Cavalry is underfunded and undermanned, in addition to not having been paid due to Cheyenne interference, but Brittles is determined to drive the Cheyenne back up North before he retires. Matters are complicated by the insistence of the Major that his wife and niece are evacuated with the patrol, and by the decision of the niece, Miss Dandridge, to flirt with two of the officers, Ross (Carey Jr) and Cohill (Agar). This romantic triangle is the most tedious part of the film. The stage-Irish comic stuff with Victor McLaglen as Sergeant Quincannon is fairly idiotic, but at least it's quite well staged. 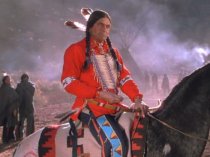 However, in looking at the film with a somewhat stern glare fifty years later, it's important not to forget that these romantic and comic elements were expected by the contemporary audience and were probably what made the film so successful at the box office. The sentimentality and comedy come straight from a storytelling tradition and the very broadest kind of theatrical extravaganza, designed to distract a boozy audience and make them whoop and weep. Ford loved this kind of simple entertainment and was, at his best, very good at it as The Quiet Man and Judge Priest demonstrate. But he was equally capable of going well over the top and this resulted in embarrassments like What Price Glory and the unbearable Tobacco Road. What we see in the Cavalry Trilogy is Ford wearing two hats at once serious film artist (whatever he might say to the contrary) and audience pleasing showman and I think he generally gets the balance right. Without Quincannon and his life-enhancing vulgarity, the film would be very sombre and, I think, unbearably sad. As for the romantic elements, theyre no worse than in most studio pictures of the time, although I find John Agar a real trial to watch. Hes somewhat redeemed by his warm relationship with Waynes Brittles, but I dont think hes helped by being put alongside a genuinely charismatic young presence like Ben Johnson.

What powers the film - the title of which comes from an old song and tradition that a girl in love with a Cavalry man will wear a yellow ribbon he gives her - and gives it an emotional charge, however, is the central theme of the Cavalry as a brotherhood, or even a family, which transcends simple soldiering to become something almost religious. It has its own rituals and codes which must be adhered to, otherwise the whole thing falls apart. This is the basis of many mythic structures of course - Camelot for example - but Ford has such a passionate feeling about the Cavalry that his vision becomes unique. This is not a remotely realistic film about America in 1876, it's as much a legend as John Boorman's Excalibur, and it can only really be understood in that context. Captain Brittles is that familiar figure from myth, the aged knight keen to do one last heroic action to preserve his reputation - and Wayne's presence inevitably brings undertones of his own legend, built so assiduously by the actor and his family.

Ford stages some wonderful scenes of ritual involving the man; his chat to his wife's grave for example, a scene which would be hideously embarrassing performed by virtually any other actor, and the beautiful moment as his men give him a gold watch on his last day, when you think for one heart-stopping moment that the Duke is going to cry. Wayne underplays these scenes with a humour and presence that serve the material and strengthen the character.
Source: film.thedigitalfix.com 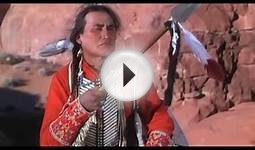 She wore a yellow ribbon - USA 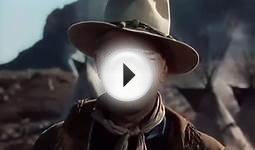