This film is referenced a lot when Westerns are discussed but even though it was directed by John Ford and stars John Wayne, this 1949 movie, shot in Monument Valley (as usual for Ford), I was not especially impressed by She Wore a Yellow Ribbon. There is a lot going on-as if Ford tried to cram all the possible plots of a Western into just this one movie-and at times I had difficulty distinguishing the supporting characters from one another.

She Wore a Yellow Ribbon is the story of a small United States cavalry outpost in the Southwest in 1876 that has to defend itself against Indians uniting for war. It opens with a scene of a stagecoach driving through the desert and a mention of Rio Bravo, making me wonder if Ford was referencing his past and future films. John Wayne plays Nathan Brittles, a captain who has only a few days left of service before he retires. Some of the best scenes in the movie occur between Brittles and his sergeant, played by Victor McLaglen.

There are women at the outpost, too, and one day, Brittles escorts two of them to a stage station where they will catch a train going East so they will be safe from the Cheyenne Dog Soldiers who are attacking the army. One of the women wears a yellow ribbon in her hair. She seems spoiled and immature—flirting with the men, wanting her way and not listening to people who know more than she about the dangers of life in a remote, unsettled area. The women ride horses instead of travelling in the accompanying wagon, and I just don’t know how anyone could have found it comfortable to ride side saddle! She Wore a Yellow Ribbon then shows how the actions of the younger woman, played by Joanne Dru, affect the lives of the cavalry soldiers as they go about performing their duties.

She Wore a Yellow Ribbon is a voyage of discovery. As the cavalry patrol goes about its business, all sorts of mishaps and adventures befall it: Indians are seen, men get shot by arrows, the stage station is attacked, there is a fight in the bar. Just as in Six Strangers at Apache Springs, the fight here has too much slapstick and is over the top. Unlike the TV show, however, the fighting in the movie is interspersed with conversation, which makes it slightly more tolerable. Captain Brittles also discovers what is important to him, as an officer and as a man, as do some of the other soldiers. 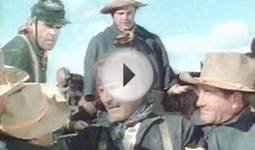 She Wore A Yellow Ribbon (Trailer 1) 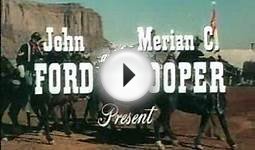 She Wore a Yellow Ribbon - Trailer