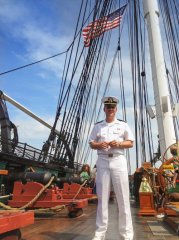 Last week on my way home from the dog park, while I was waiting for the stop light to change, I glanced over to the bank on the corner and the enormous U.S. flag they display. It was completely dark outside, and the flag was still on the pole, not illuminated, faintly visible in the night sky. (In case you need to brush up on your flag etiquette, here you go.) And suddenly I felt a surge of anger. Because, you know, that’s completely normal, right?

My thought process went a little something like this: How disrespectful…don’t they know if they’re going to fly the flag at night, it should be properly illuminated? I should go tape a note to their door with a print-out of proper flag protocol…how rude. Who am I, Michelle Tanner? *a couple quiet moments in my brain* …what the heck just happened? Why is this upsetting me? Slow your roll, Kristen.

It’s starting to happen. Preparing for deployment has turned me into a certifiably crazy person.

These strange, overly-sensitive reactions to things that in my brain somehow connect to the Navy and deployment and Ben became more frequent as his departure date approached. When I hear the national anthem, I get teary-eyed and a lump in my throat. When I see I person in uniform (there are tons at OU every Thursday – ROTC kids), I want to run up and hug them. (Don’t worry, I don’t. I haven’t involved other people in my crazy…yet.) Sappy songs about long-distance love are not allowed on my playlist. I would look at Ben’s socks on the floor and think to myself how I’m going to miss seeing his socks on the floor. This coming from a person who does not like clutter and thinks that everything has a place and should be in said place unless it is being used. Before he left this morning, Ben cradled Nimitz’s head in his hands and told him that he was going to be the man of the house now, it was his job to protect me. Yep, nearly lost it. I couldn’t say “good morning” to Ben today without getting all teary-eyed.