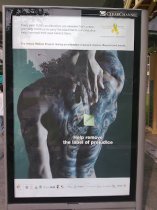 I've been paying more attention to advertisements all around me (this includes the fact that since I am taking Com101, I have no choice. Haha.)This particular advertisement, however, caught my eye the most :

Yes, this is one the latest efforts by the Yellow Ribbon Project (YRP) organisers to encourage the public to embrace ex-convicts back into a non-prejudiced society. There's catchphrase that comes with the YRP too - "Help unlock the second prison".

Have you ever wondered, "why the colour yellow?"

If you haven't known yet, the idea is actually derived from an old song (1973 to be exact) by Tony Orlando called Tie A Yellow Ribbon. The song is about a man who has finished serving his jail term and he doubts that his lover would take him back. While still in prison, he wrote a letter saying that if she is willing to take him back, she should tie one yellow ribbon around an oak tree near their house as a sign of acceptance. To his surprise, when he came home, he saw A HUNDRED yellow ribbons tied to the tree.

In accordance to the song, the yellow ribbon symbolises a second chance and acceptance. The fact that his lover embraces his return shows that she is willing to put the past behind and start anew - loving the man for his great qualities, rather than holding prejudiced thoughts against him for his past mistake.

That is exactly what the YRP organisers hope to see out of this movement - maybe not to "embrace" the ex-convicts, but eliminating prejudice and stereotypical notions of them in society would be a good start.

However, what struck me the most is that the advertisement itself portrays a stereotypical image of an ex-convict. Over time, society has developed a shared perception that convicts have tattoos all over their body. Here, the yellow post-it note labelled "prejudice" pasted on the man's back is not the only "label of prejudice", but the tattoos itself also represent another prejudice symbol.

Also, the fact that the tattooed man can't seem to reach the post-it note to remove it parallels the difficulty of removing the tattoos on his body (i.e. costly procedures) - both a sign of difficulty of acceptance in society.

Nevertheless, not every man with a tattoo is bad. Sure, there are those who sport tattoos to make themselves appear more intimidating (especially those in gangs), but there are also those who see it as a form of body art, in which they can express themselves as unique individuals.

However, first impression leaves the most lasting one. As humans, we tend to select the qualities that stick out the most in a person.