You see him walking the hospital halls, sitting in the lobby of the outpatient building.

He usually has a cup of coffee in his hand. It’s a comforting smell. He looks like your grandfather. As you pass by, maybe hobbling on crutches or manuevering your wheelchair, he’ll gesture at your t-shirt, the one with your favorite team’s logo.

Ohio, he’ll say. They played a great game on Saturday, didn’t they?

And you’ll light up — because they did and because you don’t know anyone else here in this military hospital a long way from home who knows or cares about your favorite team.

That’s how the conversations start. He introduces himself: Bob Talbot, Yellow Ribbon Fund. Next thing you know, you’re making plans to meet Bob for coffee or lunch, then a ballgame. Somewhere along the way, you find yourself talking about your future.

Bob Talbot, YRF’s director of mentoring, makes all this look easy. It’s not. 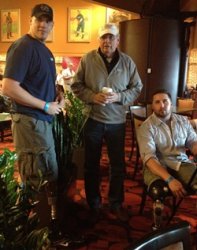 After 42 years at Catholic University (CU) in Washington, DC, he’d just retired when two YRF board members asked him in early 2007 to start up a mentoring program for YRF. At CU, Bob had coached baseball and served as dean of admissions and then athletic director. He was used to dealing with young people. Still, he wondered, Why would they want to talk to me?

“Mentoring, ” Bob explains, “is a one-on-one type of program. You have to gain the confidence of the soldier. It takes a little bit of time and several encounters.”

Many service members are athletes, attracted to military service in part by its physical demands. So over the course of more than 600 interviews with injured service members, Bob has come to rely on sports as a conversation starter.

In addition to his personal knowledge, he counts on the generosity of YRF donors – thanks to them, Bob is known as the guy who always has tickets to give away to sporting events.

When the conversation turns to the future, Bob draws on a lifetime of experience to pair them up with mentors. Maybe a wounded service member is interested in welding, maybe college, maybe a career in policy-making or law enforcement. Bob’s contacts range from the union hall to the FBI; from college campuses to arts studios; from K Street to Capitol Hill. Judges, deans, a broadcaster, a social worker, a software specialist — it seems as if there’s nobody Bob doesn’t know.

He arranged a campus visit for Evan, an Army corporal interested in architecture. Evan was in a wheelchair at the time, broken bones in his back and leg. Bob took him around to meet CU’s architecture dean. He had lunch with other students. “If I came here, would I have to live on post?” Evan asked his civilian hosts. Their puzzled reply: “You mean… on campus?” It gave him a taste of college life. Evan later applied, was accepted, and has been on the honor roll ever since.