Tie a Yellow Ribbon 'Round that Damn Pine Tree September 10, 2016 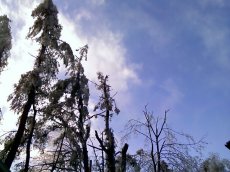 We’ve been living underneath white pines for a while now.

I’d never given them much thought until the ice-storm of 2008. Until then only their needles seemed a nuisance but after one snapped in half, landing on our garage, everything changed. I looked at them very differently starting then.

After that with each gust of wind my head would reflexively try to retreat between my shoulder blades like a turtle’s. It was the beginning of a long slog worry.

Three years later, a freak October snow storm didn’t do anything to assuage my fear. That’s the view, looking east, down the middle of our street as if I needed any reminders that stuff can fall from the sky.

Planted every five feet, about 100 years ago, I think their purpose was to designate the rear lot’s back property line. I’m sure they were short and looked delightful. 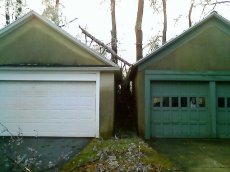 During this century though, I’ve been trying to console myself by thinking things like, “A tree can only fall once…” That three of them up and died didn’t do anything to improve their esthetics.

It only seems like it took forever and a day but last Thursday “the day” finally came. Tree Removal Day. The first contractor we talked to wanted nothing to do with this job. The garages… the wires… the garden… problems… problems… problems… “What you need, ” the man said, “is someone with a crane.” And then he gave me the name of Mayer Tree Service out of Essex, Massachusetts. 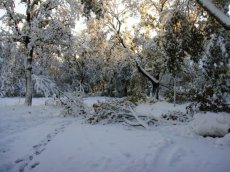 Mayer been busy for the past few years removing trees susceptible to the Asian Longhorn Beetle. We visited them during a recent job on Marsh Ave.

They are not intimidated about removing big trees from tight locations.

And we had loads of them.

This is what the crane looks like when it rolls up your street. It’s big but not particularly impressive.

But this is what it looks like fully unfurled. It had five telescoping sections. Its boom is over 140’ long.

That’s plenty long enough to draw people from their homes and out into the street to stare.

And cutting to the chase (Oh, fun! A pun!) this is what years’ worth of worry disappearing in seconds looks like. [Hey Thea! That’s your house!] 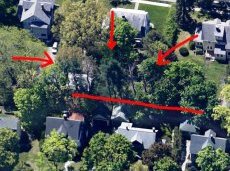 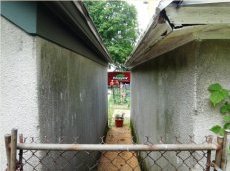 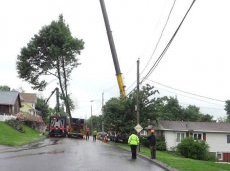 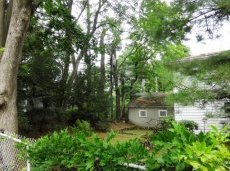